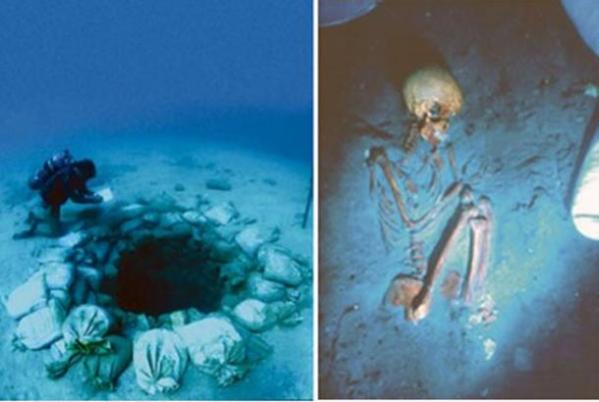 I originally saw this article through Facebook when it was posted by Powered by Osteons. After a read through the article I thought it was worth sharing. A settlement dating to the 7th millennium BC has been excavated off the coast near Israel.

This site was first discovered in 1984 by marine biologist Ehud Galili. Excavation of this site have revealed houses, a well, stone paved areas and stones walls. In addition to these more usual finds a megalithic structure was also identified. There are 7 of these megalithic measuring up to just over 2 metres surrounding a fresh water well.

As well as the impressive megalithic a many floral and fauna remains were found, including human remains. There were a total of 65 individuals found at the site, with some identifies as having been buried in graves. It has also been noted that two cases of tuberculosis (TB) were discovered in the skeletons of a women and child. As if this was not compelling enough it was identified that these were the earliest cases of TB. There are references to the original papers at the end of the article.

It’s impressive what can be found underwater and expect that in the near future we will hear more from this area of work. As technology improves I am sure that archaeological and historical digs will become easier underwater, revealing new worlds and past civilisations – and I cannot wait!

Link to the article here.

saving you the trouble because every day counts

The Re-Discovery of a Copper Age, Beaker burial from Caithness, Scotland. This is Ava's story.

Seeing the Light of Day

The many ways in which we encounter the dead body in contemporary society.

How to Emerge as a museum professional: a guide

PhD Student chatting about things that are Roman and Magical. Usually both.

Archaeology; death and dying; the past in the present; gender and identity

Just like the Thesis Whisperer - but with more money

The Musings of a Crematorium Worker

Life , death and everything in between

Citizen Science in the 19th and 21st Centuries